The Digitalization of the American Workforce: What it Means for Employers Today 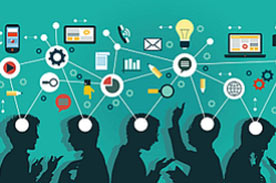 Innovation and adaptability keep the world of industry constantly moving forward, expanding business opportunities, offering more jobs, and nurturing a growing global economy. Advances in technology over the last few decades, however, have simultaneously created new jobs while rendering many other positions obsolete. Worry over automation and artificial intelligence replacing low and middle-skilled work has troubled a workforce that has been historically confident in their job security. But the digitalization of formerly analog positions is only the most recent "revolution" in a series of changes over the last several hundred years. For businesses looking to retain loyal employees and become competitive in hiring, embracing change and implementing comprehensive training programs is essential.

Change in the workforce isn't new. The most famous example of workplace change would be the Industrial Revolution, which is considered to have happened between 1760 and 1840. Beginning in Great Britain, this period saw a move away from manufacturing by hand toward new innovation-machinery, steam power, and the introduction of the factory system. Once accepted, the Industrial Revolution rapidly changed every facet of life and economy for workers and businesses in the Western world.

Though many economic historians will debate when the Industrial Revolution "ended," it's commonly thought to have slowed sometime after 1840, when the global (but predominantly Western), economy had fully embraced manufacturing life. A rapid decrease in new methods of manufacturing and business led to what's known as the Second Industrial Revolution, or the Technological Revolution. Beginning sometime in the late 1870s, this technological revolution would usher in the telegraph, railroad networks, new gas and water supply systems, and widespread access to electricity. That brings us to today and digitalization.

Digitalization is "the process of employing digital technologies and information to transform business operations."1 New and faster technology is introduced rapidly and, with it, a growing fear that an American workforce could be replaced almost entirely with automation. While digitalization has helped improve the performance of whole industries, it's also led to a larger disparity between available skilled positions and workers skilled enough to fill them. "Between 2002 and 2016," according to a report from the Brookings Institute, "the shares of US jobs and employment that require substantial digital knowledge rose rapidly."

Take a moment to scan the least skilled openings on a job search website like Glassdoor; you'll see that most jobs available require some basic computer skills. In earlier decades, a person who was knowledgeable with computers in some basic capacity could secure a well-paying position; they would be an in-demand hire. Today, most job openings stress "basic computer literacy" in their ads, while offering only slightly more than minimum wage. This isn't limited to administrative work and "white-collar" positions; the average worker in America needs to be marginally comfortable with digital work to complete even basic functions such as submitting a timecard.

The digitalization of jobs and the economy doesn't just affect the workforce; it impacts the employers searching for skilled, reliable people to fill open positions. So how can companies and hiring managers find ways to fill these open positions? Creative training and education methods that allow organizations to upskill and reskill their workforce while providing access to relevant digital skills. To compete for desirable employees in a tight labor market, with fewer meeting the required skillsets, companies and firms need to adjust.

This "digital imperative" prompts firms and companies to do more to recruit a reliable workforce, even going so far as to offer tuition reimbursement programs to encourage employees to develop the requisite skills. With the development and further acceptance of online education, employers are able to partner with leading education providers to bring new and current employees the most up-to-date training needed to improve their skillsets.

Innovation is moving at an almost breakneck pace. New technology is introduced so regularly that it rarely makes waves, but there will always be those left behind who lack the basic digital skills required to perform the most entry-level positions in your company. In order to grow and sustain a successful business amidst the rapidly changing American workforce and fill the open positions necessary to running the day-to-day operations, companies and schools need to embrace this change. Being on the forefront of workplace trends is more than creating new products and different ways to bring those products to market; it also means investing in, supporting, and training a new kind of worker, one who can be comfortable moving forward with the business and its digital resources.

Recommended for you: What's Next for U.S. Manufacturing? Industry Leaders Weigh In

Get the latest on skills, talent, and economic opportunity