Who Will Replace Retiring Boomers in the Manufacturing Industry? 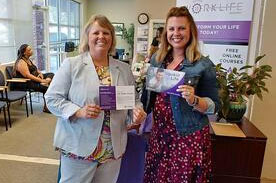 Posted by Kate Coble on August 23, 2019
As unemployment rates remain steady and the quickening pace of business drives resource needs sky-high, employers find themselves at a loss. Grappling with an inability to fill crucial roles within their organization, many employers turn to temporary staffing agencies to help them fill the gap, relying on companies like EmployBridge, one of the largest industrial staffing companies in the US, to place competent, workforce-ready candidates in their payroll. But how do staffing agencies ensure they have enough skilled temporary employees to meet the growing need?
Read more...

3 Ways to Advance Your Mechanics

Posted by Emma Rose Gallimore on August 20, 2019
Electric cars. Hybrid engines. On-board computers. Technology is changing the automotive repair industry. Your success as a repair shop depends on the quality of your mechanics. Are they keeping up with changing technology? Do your best mechanics stay with you, or move on to new opportunities in other shops?
Read more...

Vote for Penn Foster's SXSW Panel and Join Our Movement

Posted by Penn Foster on August 15, 2019
With the majority of the current United States labor market falling somewhere in the vast space between high school graduate and college graduate, those trained to fill roles in this education-gap are often labeled as "middle-skilled." Jobs either require a degree, or they don't and those who are stuck in the middle can find themselves locked out because of the all- or- nothing approach of many employers.
Read more...

What Skills Do Workers Need for the Future?

Posted by Emma Rose Gallimore on August 13, 2019
It's a truth not yet universally acknowledged that skills are more important than degrees in today's economy. Proactive employers are reworking job postings and hiring processes to bring in applicants with the right aptitudes. They're also training workers to improve vital competencies. It's a step in the right direction. But are employers doing enough?
Read more...

Posted by Emma Rose Gallimore on August 7, 2019
As a veterinary practice owner, manager, or executive, you want to provide the best care possible for your clients and patients. But you can't do it alone. Providing quality care in the modern veterinary health care market requires a whole team of qualified staff. The American Veterinary Medical Association has been promoting the concept of a veterinary health care team for years, and with good reason.
Read more...

Posted by Penn Foster on July 31, 2019
When you think customer service, you might think about such industries as retail, hospitality, and restaurants. In these industries, training workers in customer service is essential. At the same time, almost every industry could benefit from workers who have customer service training.
Read more...

What Manufacturing Employers Can Do Now to Fill Jobs

Posted by Penn Foster on July 24, 2019
When the average person thinks about manufacturing, they picture huge multinational corporations with hundreds of employees. However, most manufacturing companies are small businesses with fewer than 20 employees. If you're running one of those small manufacturing facilities, you know first-hand how difficult it can be to find qualified employees.
Read more...

Is Your Practice Prepared to Meet Clients' Needs?

Posted by Penn Foster on July 17, 2019
Veterinary medicine is a booming industry. With an estimated 67% of US households claiming at least one pet in the American Pet Products Association (APPA) biennial survey, there's no question that veterinary practices, both private and corporate, should be booming. However, with an influx of new pet owners, it's difficult for practices, small and large, to keep up with appointments and quality patient care without credentialed veterinary technicians on board.
Read more...

How Will the Gig Economy Shape the Future of Libraries?

Posted by Ronald J Stefanski on July 16, 2019
The gig economy, the free market system in which temporary positions are common, has grown exponentially in the past decade, from 10.1% in 2005 to 15.8% in 2015.1 The growth of this industry falls to the development of new technologies that enable transactions directly between providers and consumers and the increasing disinterest in acquiring traditional 9-5 jobs.1 More than ever before, people are filling temporary roles including working as handymen, cultivating content as freelance writers, and performing administrative work.Despite the temporary nature of these roles, they often require new skill sets to be learned. Free educational services and skills development programs provided through libraries have become critical to job placement and advancement for many gig positions and demand continues to increase.
Read more...

Get the latest on skills, talent, and economic opportunity